Everyday of April was spent in Florianopolis the Brasilian island city famous for tourism and 42 beaches in the state of Santa Catalina.  Great weather, water activities and a good mix of culinary options full of seafood choices.  As well the mix between salt water and fresh water beaches proved why the population quadruples in January and February, but not April!  Yeah for low season and low season prices!! 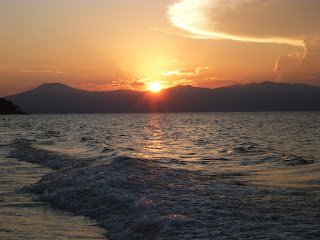 The first day of April we road the lovely remaining 350 km of highway 282 to the coast. Campos Novos to Lages C7R7T3V7, a few spots of straight and construction, but for the most part very green and curvy.  Lages to Rio Joao C4R6T3/4V6, straights through forest and logging trucks.  Alfredo Wagner to St Amaro C7R6/7T3/4V6, treed curves.

Through part of the European Valley getting close to Floripa.  Much longer than expected due to great curves.  Of course I'm not complaining. 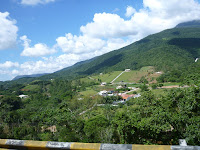 Home for a month.  Florianopolis (Floripa for short) and more specific Canasvieiras at the North of the Island.  A beach front 2 bedroom, 2 bathrooms with hammock and all we needed.  I loved taking morning swims in the ocean and returning jumping in the pool to take the ocean off of me and my SUNGA.

Nice apartment for a great off season price, if you can call it off season (24 to 30 C with a few days of rain over the whole beautiful month of April).

Welcome to the Neighbourhood and Neighbours.  Ken Love and the Floripa Expats.  Early in the month we met the very energetic and knowledgeable Ken Love an United Statesian who became a fixture in Brazil in the 70's when Brasila became the capital.  Along with his buddy Jack a 90 yr old WW2 veteran who received a Purple Heart.  They've had many good days here and own some very nice apartments.  Great to meet all the Expats and I hope to see them all again.


Cane juice right from the stock.  It's really healthy!  and used in Ken's Classic Caipirinhas.


Bonny lands in Floripa.  And why not, we had an extra bedroom and bathroom so I took a quick look at flights from Calgary to Floripa for 10 days and what do you know, when you want something to happen you find a normally $1300 USD flight for $500 USD!!!  So, we gave her an offer she couldn't refuse or live without!


Cost ao Golf Club - Not too many Golf Courses on the Island and I think this is the only one with 18 holes although as you will see in the photos I'm glad we only played 9!


Beach Time - A little tour of a few beaches with Manuel, Jessy and Bonny over a couple of days.

Diving at Arvoredo Island - Signed up for a couple Dives and brought the girls along for a little snorkeling.  Of course we had a little practice in the pool first.

A surprisingly choppy sea between the main island and Arvoredo which Jessy didn't handle well.  And unfortunately the dives were not great due to the strong currents that rocked the boat.  We didn't even move dive spots and stayed in 2-3 metre visibility at a depth of 10 metres.  And boy it was cold!  The first dive was 50 min and the second only 25 min as I had ear issues and really didn't feel like seeing the "same old" from the first dive.  Apparently it was my guides first tour and she was one of only two that spoke English.   Regardless, I needed to have a refresher dive since I hadn't been under for 3 years!

Coming back looking at the North Coast from the boat.

South Island which is anything below the main city of Floripa needed to be explored and required two separate days as the highway divides South of the City.   So, doing it all in one day involves a lot of back tracking and that's just not my style.  Let's call them the Ocean side and Inland side or Beaches and Oysters, respectively.

Barra da Lagoa was the first stop down the Ocean side of the Island on the way to the South junction in Lagoa da Conceicao and then all the way to the end.  Barra is fantastic and I need to stay here for a while next time!

A quick stop at Praia Joaquina another beautiful beach.


Armacao and Praia do Matadeiro make for another great spot to stay.  Fishing on one side of the point and a nice quiet swimming beach at Matadeiro.

After the nice time on the point at Armacao it was back along the Ocean coast and all the way to Praia da Solidao (Solitude) where we ironically made a friend.

South Island Recommendation - Never go or return during Rush Hour as there is very limited access meaning 3 km lines to return at a minimum!

Part 2 of the South was all the way to Castaway Beach which included a decent hike to get over the hills to it.


It's not paradise, it's like everywhere else, you just have to figure it out.  Some photos to capture learnings, issues and hell why not food.

Honorable mentions - Motosuper in the city where I changed tires and had a few tweaks made including the repair of my starter switch, yeah!  And Santo Antonia de Lisboa - A quick lunch about 20 minutes South of Canasvieiras was well worth it.  Very similar to the inland side of the South part of the island where we had great oysters.

Ants never cease to amaze me.  Seriously, I couldn't believe the size of the piece of fish they moved and how organised they were.  Enjoy the video and team work!