August started with the yearly Fish Fry at Brendan's cabin, lots more sailing and some repairs and of course I enjoyed the Olympics as much as possible.  On the music scene I began to scout a place to go on stage for the first time and the final Tragically Hip concert was aired on CBC.  Thanks Gord.


August Long Fish Fry.  Just a good old time out at Brendan and Andrea's cabin for a few nights of fun.  Check out the ridiculous sized RV trailers on the road going camping around Alberta.  Do they really need a house? 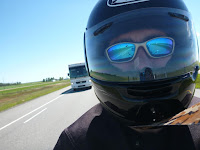 Some fun and games, beer consumption, fishing, and great food and friends.  Awesome weekend and I can't wait until next year!


More Sailing and a little Repairs.  Some nice moments out on the Reservoir sharing my new passion with great friends.  It's my new phrase, "Let's get out for a sail"

Olympics.  As always I became glued to the Olympics.  Some great stories and good future for Canada.  Some events and rules still bug me, but what can you do.  A shame the muslim world doesn't allow their (female) athletes to wear proper attire to be on the same compete level as the other athletes, but I guess it makes it all that sweeter if some day they win.


Music -
Open Mic.  As before when I did stand up comedy I decided to start checking out open mics for playing guitar and singing.  I recommend this process to anyone.  "Give yourself a chance.  When you want to do something put yourself around that experience and the next thing you know you will be doing it!"


At Mikey's Juke Joint Wednesday Nights.  Over my head...

Tragically Hip last concert.  Due to the lead singer, Gord Downie, being diagnosed with Brain Cancer the hugely famous Canadian 90's rock band decided to have one last tour finishing where they began in Kingston, Ontario.  What's more incredible is that the national TV station CBC diverted from Olympic coverage to show the 3+ hours of concert watched by 12 million Canadians (33% of the country).  Very, very cool to hear that.

Motorcycle shop bathroom with a motorbike in it!