Europe 2016 - With no work on the go in this the low period for Oil and Gas I decided to dust off my beloved "Danny Beeman" 1970's backpack and head to the mother land once again.  And the plan was to go around this route more or less by Motorbike.  Europe Part II. 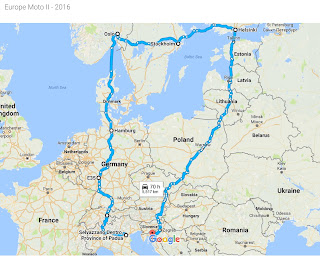 A Few Quotes for this trip:

"What you expect you receive"  "Life is truly about the laughs"

Even the day I was going to the airport I still was not sure if I would have a moto to use in Italy due to insurance and ownership paper issues, or buy a moto in Germany or just say screw it and try to find some sailing in Croatia.

Moto Owner Side Story - An Italian friend I made in Brasil mentioned in April that he had a moto in Padova, Italy that he left at his mom's house years back.  I told him at the time that I would like to borrow it and he said "no problem."  Ah...well after solving all the problems the moto would be mine for the 10,000 km ride from Italy to Norway to Finland to Croatia and back to Italy (but who knows exactly where I'll go).

At home in Canada, all my stuff going and a quick chat about the situation.

Problems in Frankfurt.  Our plane was diverted to Koln for 2 hours due to an incident that shut down the Frankfurt terminal for the morning.  Initially thought to be a bomb scare it was nothing more than some lady found beyond security with out being checked.  Who knows the true story...

Big lines for all people who missed their connections.  Luckily I had an 8 hour lay over in which time I found out the moto was going to be ready and usable for my trip.  Venezia here I come!

Stayed the first night in a campground with pre-constructed tents and cots provided.  Hey it was super cheap and a totally different experience AND I arrived at 12am so it was pretty much bed straight away!


The next day I moved to Mestre just outside of Venice, then took the bus to the city of canals after getting settled in to Hotel Giovannina.

I was in Venice years back in about 39 C heat and didn't enjoy it as much as this day.  Lots of photos.


Trained to Padova (Padua) where the motorcycle was being readied and inspected.  Luciano a friend of the moto owner Manuel was my contact and helper.  Thank you my friend.  As well he took me out for lunch and found me a great Bed and Breakfast, Valeria is such a sweet lady connected to sailing too.

Padova hosts one of the biggest churches in Europe and lots of other wonderful sites.  As well as great people and great food!!  Love Italy!

On the back of Luciano's moto.  Italians love to go fast and slam on the brakes.


Walking tour of Padova with out a guide...meaning I have no idea what I was seeing, but it was nice!


Quick tour of my 30 euro paradise at Valeria's.

Although the moto was ready my first night in Padova the insurance wasn't active until 12 am!  So, one day sleeping in was good for me to help to get the jet lag out.  10 hours sleep.

Recommendation: Honda Moto Sport in Padova is a great shop to get work done.  Luca is a good guy for sure! They do all the little things most shops miss.  License plaques, protective stickers, wipe downs, etc.