April in Punta del Este. Fancy because it's where all the Rich and Famous of Argentina and Uruguay hang out in the summer.  A small quaint city close to the beach and a much better price in the off season made my decision to delay my return to Buenos Aires for 1 more month an easy one.

Punta del Este is a resort city that sits on a southeast point of Uruguay, but in April it's simply a nice little town.  Let's have a look.

Without my steel horse I had a lot to carry down two flights of stairs to a taxi, then most of it went under the bus and in the trunk of another taxi to my new apartment for the month at Torre Antares.

Recommendation: Fuego Urbano for their lunch menu for only $5.50 usd Monday to Friday!  See Other Stuff for photos of their food.

Uruguay Tourist Discount - Anyone who's not Uruguayan gets 18% off your restaurant bill.  I felt bad for the Uruguayans, but still used the government discount.

Tried to do a Mini Monday, Wednesday and Friday for 3 weeks until I couldn't handle the cold of the pool anymore.  The first swims took 2 lengths to warm up and the last days it took about 8 lengths to kinda warm up.  The pool was about 10 to14 C and the cold water shower rinse actually felt hot after all my lengths.  I felt great too!


A quick length of the chilly pool


Took a bus to the Marina to see if I could get on a sailboat.  Although I didn't have any luck it was a good afternoon out.  Pushed my feet and knee limit with a 5 km walk back to Torre Antares.


Walking back from the Marina, one of the main spot of Punta del Este for bars and boats. 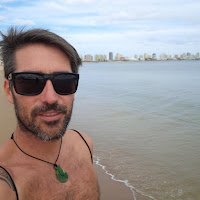 A few Sundays I made my way to the Farmers and other things Market (only on Sundays).  A 3 km walk / run each way.  The return after a kraft of wine and a filling bbq lunch carrying an extra 6 to 8 kgs of produce and fish was definitely more entertaining, especially with the "Shit Bomber".

Amazing Ants working away.  I really dig ants and you can see in my wine influenced state just how passionate I am.

Returning from the market after a wine and meat lunch I was almost hit by shit grenades!  Check out the video!


After I threw the pieces of shit back at the guy and in to his pool I had to leave when the perimeter protecting sprinklers were initiated.  Definitely having fun!

A quick walk/run down to the Atlantic Ocean near the end of the month to say goodbye one last time.

Beach pretty quiet as the end of the month approached.

And then it was time to go...Good bye Uruguay...a month already.

Started the day at 7:30am, Taxi to the Bus Station in Maldonado, Bus to Montevideo, Bus to Colonia, Ferry to Buenos Aires, Taxi to my Airbnb in villa Crespo arriving at 6pm.  Done and Done!