July 2017 was jam packed with a 4 day BC loop including a Zipline adventure, Stampede, bringing my 30 year old BMX back to life and smoke covering the city due to the BC fires.  Also the usual sailing and gardening stuff. 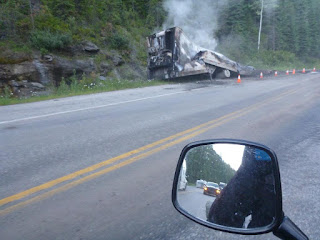 Hot and Smoky is right! on Highway 1

Made my way West at the beginning of the month in to British Columbia for a quick 4 day tour.  The trip was expected to come later in the summer, but conditions were good (pre fires) and people to visit were in place so I went for it.  Beside it was Canada's 150th and I had no BBQ plans.

First stop was in Windermere to stay at an old High School friend's recently purchased cabin.  I don't think I had seen Josie or Kim for at least 5 to 6 years so the invite was a surprise, but a welcomed spark.  An amazing ride out on Highway 1 to Highway 93/95 which was in total under 300km and leisurely done over 4/5 hours.  Thanks Josie for the invite.

Recommendations: Lake Windermere is actually very warm and underrated in my opinion.  I had been there a few times in the past, but that was the first time I went in for a swim and a few beers after.  Even the quick rain storm couldn't stop the lovely time.

Chilling in swing chair with a Local Beer!  I realised when I arrived that there was only American beer and I brought Irish Whisky.  For the love of god, one day of the year where we should all drink local so I raced over to Arrowhead Brewery.  Phew!

Day 2/3 I headed South to Castlegar where I got to spend a few quality days with my old buddy Luke and his wife Jess and huge family (Gaby and 3 Z's!). And a duck???


Hot, hungry and thirsty when I arrived at Jess's Mom's house. And then a damn duck!  Good news is I only had to deal with "howard the duck" for a few hours and then on to Luke's lovely home.  Best Balcony ever!!!

After a few nice days in Castlegar it was time to go back to Calgary to attend yet another sports specialist knee doctor appointment due to the fact that the surgeon had me on a wait list for 2 years, so I had to restart (Xrays again and sports specialist again).  Screw Doctor Ryan Martin's office!!!

Anyhow, back to the trip.  I had originally planned to leave around 9am and may be camp somewhere along the way splitting up the 700km back to Calgary.  BUT due to a Luke surprise to take us all Ziplining (especially his older kids Gaby and Zeden and Jess, me, Leanna and Jacob) I didn't leave the Kootneys until 1pm.  Who am I to pass up a gift like that, Damn you Luke you know I'm scared of heights right??!!!

Although I did the highest one (number 3 of 6 ziplines) I didn't really take the scenery in frozen with fear.

The fastest line (number 4).  No chance to hear the audio over the wind.

Left Kokanee Mountain Zipline just North of Nelson at 1pm unsure of where I was going to stop. It was such a beautiful day I decided to take my time and enjoy it.  I headed up to Kaslo and instead of going left to Nakusp which is the usual for moto riders, I went the Highway 31 way.  Google seemed to think it was a principal route or may be that was my GPS.  Whoever lead me astray, I ended up on 75 km of gravel forestry logging roads. I wouldn't want to do it every time, but on this day it was just great, especially not knowing how long the road would stay gravel was fun.


I never did figure out where to stop going all the way to Calgary landing in my bed at 2am, which was actually great.  I even stopped in Canmore to meet with a potential director for Bandido at 11pm for some beer and food.  A good break, but made for an even chillier last 100km.

If you don't know by now July is Stampede and usually fills my post with fun and games.  This year is no different.  Even better was unlike last year of rain and cold it was crazy nice and sunny.  Let's look at a few highlights.


First Friday I crashed the Grounds, Chuckwagons and Grandstand Show thanks to Pete S!


Go Cody!  I think they are all named Cody.


On the way home I went to buy a ticket for the train and the machine was not working so I figured if anyone asked me for a ticket I would show them the video.

Wednesday Stampede Shaker.  In all my adult years I never once went out with my good buddy Brendan, but this year was the changing of the tidies.  Thanks to Andrea for hooking me up with a ticket to Fort Calgary.


All Canadian Band line up; Stephen Paige from Barenaked Ladies, Trooper, Sloan and Tom Cochrane (who used to be great).
Trooper (best of the night and playing 2nd of 4 bands, a shame) "We're here for a good time"

Second Friday and First Annual Steel Horse Cowboy BUB Crawl.  I had so much fun on a bike pub crawl in the pouring rain in June that I just had to do it again for Stampede.  Although this was a good start, next year will be much bigger and better.