The month was work filled HDD inspection and any hopes of being home for Christmas for the first time in 9 years were thwarted by a few problems during the pullback.  Oh well, an opportunity to explore Chetwynd and the surroundings.

First day of the month = Take a break haha (days off).  Left the team hammering away to get the casing in. 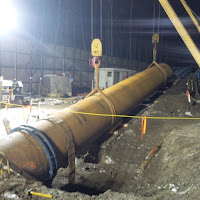 Heading to Dawson Creek to pick up some food supplies, especially meat from the Butcher Block (Recommended!).


Coming off nights I had to stay up until 7am in order to keep my sleep clock correct. So, of course I went to Amigos the only night club in town to play some pool with the locals.  Luckily it was Friday so it was just me and the locals (Sunday the Pipeline crew is off so Saturday nights are a little rougher/busier).

Back to work (still on nights). Everything was moving along quite fast until we broke a few things and got a little stuck. At least it was warm during what is usually a chilly time of year.

Christmas came and went.  The client provided a 2 hour deep fried turkey dinner and some drinks. That'll do. Unfortunately not a lot happened during Christmas holidays as most of the main crews and welders were gone. Oh and the temperature dropped furiously. - 35 C!!!

Late in the month I was given a few days off in order to make it back to Calgary for Chris's big birthday. A 1000 km to Calgary and then a stop over in Edmonton to see a Oilers game on my way back to site.  2000 plus km in 3 1/2 days.


Chicago Blackhawks at Edmonton Oilers from the nose bleeds, but hey my direct competitor bought them...haha...


What a Breakfast Buffet at Matrix Hotel (Highly Recommend this hotel).  I would walk over a dead body to get those cinnamon buns, YumYum!


Massive Christmas light display in the middle of nowhere, but that's probably the most important place to put them, right?


Best "RESTROOM" in Canada (2016).  What is a Restroom?  Isn't that what they say in the US?  Either the contest is bullshit or the signs to boast this honour were cheaper to make in the US?