4 Nights in Playa del Carmen (Playa as it's known locally) full of food, especially seafood and drinks, roof top pool and late nights in this party town.  Manage to check out a Cenote as well. 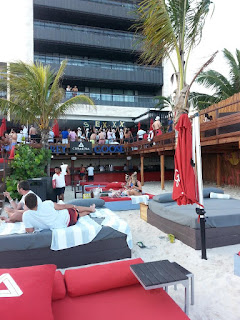 Is this known as Party Playa yet?

Made our way to the ferry terminal in Isla Mujeres which is about a 4 block walk. Ferry for $14 USD to Cancun, a $6 USD taxi to the Colectivos (Vans) to Playa which cost $3 USD finished with 12 min walk to our fantastic apartment with rooftop sitting pool.  A perfect 4 days of fun and relaxation on the mainland.


Tight beach area, not sure that's the best part of Playa.  I am sure the hotel brochures are sexier than the actual beach fronts they boast.  Beware!


Possibly my favourite lunch spot ever!  Chiletin has a great vibe, great seafood and good drinks to get a guy back on track. A tribute to Chiletin.

Other moments around town.


Cenote Chaak Tun which is cold and dark and very overpriced.  $30 USD for 1.5 hrs to swim with rental gear (light did not work).  Stay tuned in the next post to see how you should do a Cenote proper!


Screwed up camera, flashlight didn't work and we arrived late so we were the final group of the day and everyone wanted to go home.

Isla Mujeres where we landed and checked in to Mexico.  What a pleasant surprise with great food (lots of seafood as expected), spots to have a few drinks and a very nice North Beach.  Not to mention very sailboat friendly with a few protected bays where we passed quite a few foreign boats chilling for Free.

Walking to the Port Captain Check In Point.


Checking in to Mexico if you are the captain of a boat (expect 2 days):
0) CHECK OUT OF YOUR LAST PORT.
1) Capitania de Puerto, bring Zarpe, Crew List, Ownership papers, passport, 5 plus copies of everything
2) Migracion (Immigration), give passports
3) Bank to pay immigration taxes $32 usd (normally one of the taxes included in your flight to anywhere)
4) Get Migracion stamp
5) Agriculture check, may or may not need fumigation.
6) Aduana, likely need to bring the agent to the boat.
7) Pay about $500 usd.
8) Get 10 year Tourist Permit for the Boat in Cancun.


Once we were checked in it was only a matter of time before Arthur got the boat permitted and left to Puerto Aventuras where is Girlfriend and Dog were waiting on the A/C unit he had bought in from the USA.

While we were checking in to Mexico we stayed overnight in Marina Puerto Isla Mujeres which is fantastic for only a $1/foot.  So $32 per night got all of us showers and time in the pool.


Sterling and I continued to hang out staying 3 more nights on Isla Mujeres to get a feel for the place.  Two nights in Hotel Boca Inglesia (bland and pricey) and 1 night in Hotel Carmelina (cheap and friendly), both close to the North beach which was about 5 blocks away.

Recommend: La Mexicana for roasted chicken, Compadres for Tikin Xic and Hotel Carmelina.
Don't Recommend: Oscars for a sneeze of lobster on your pizza and Hotel Boca Iglesia.

Super Side Story: Dead guy on the North Beach.  I didn't take any photos and not sure what had happened; fisherman who washed up on shore or may be foul play.  I got a quick glimpse seeing the deceased was wearing clothes just before the police put a tent and police tape around the body which was there until the sun went down.  People who arrived later laid their towels right beside the tent.  One lady beside me a few hundred metres from the scene said "I don't know what happened, but I'm just waiting here with my kids until they move the body."  Tourism meets reality...


Check out these big shots at Poc-na beach bar