The month began rough of course with "the breakup", then a little stampede to help me get back on the horse which I fell off getting sick and finally got in to a routine starting to sailing, golf and play pinball. As well, big Congratulation to Claudia and Eduardo for 25 years strong together.  Love you guys.

Good-bye Mexican Family
I suppose lets get the tough stuff out of the way first. After 1.5 years trying to make our relationship work through ups and downs it was finally time for Ana and I to part ways. We our both strange and good people which is why I think we were so drawn to each other and it made sense in a lot of ways to be together, but it didn't work.  At least we gave it a shot. I care for her deeply and always will and hope the very best for her. But in the end the best thing for me and I hope for her was to let each other go which they say is the true sign of love. Thank you Ana, Fivy and Chato for opening my heart.

Would this have worked...we will never know... 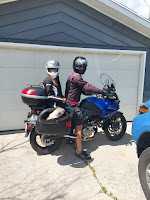 Stampede after a 2 year break. And everyone was out to go nuts!

Sucky Side Story: Went to Badlands tent on Monday (I think?).  We were on beer tickets for the first hours.  I tried to get change for a $5 bill to give a tip on the free beer tickets, but no bartender had any actually money, wtf?  Then I was expensing a few rounds and realised they already had a 18% mandatory tip included in the bill and were cheeky enough to hand me the e-terminal which had a section for 20, 25, 30% tips been on top of the mandatory 18%.  So I paid 38% in tip on a few rounds of drinks and of course only a mere 18% once I found out their scam.  And to top it off I didn't get one of my receipts so went on a different day to ask for a duplicate receipt.  Met a super friendly helpful guy "Chris" who assured me I would get it in the next day or so...Nothing.  Needless to say I am not a fan and will avoid this tent for years to come!
Gord Bamford gave us a great show at Ranchman's.  Even met him after when he came up to hang with the big shots I was rolling with!

With great fun comes great responsibility...Damn.  Rona me for the second time.

Congratulations to Eduardo and Claudia on renewing their vows after 25 years.  And no less but in Europe with their two boys, Gabo and Diego, and some family.
Other Stuff