A month of Half and Half, working in Kamloops on a Microtunnel and back in Calgary taking courses then it was off to grab "my boy Blu" the motorbike and head South as far as the Mexican border via Portland, Yuba City, San Francisco, Los Angeles and San Diego.  Stay tuned for October Part 2.

Working in Kamloops for the first part of the month, well that was the plan.  Unfortunately with out all the now needed new courses when I got off the plane and being unable to get in to these courses in Kamloops it was a few days and then back on the plane to Calgary to take courses.  Then back to Kloops.

Fraser River from above

Miles and Miles of farm land to the East of Calgary

And then back to K-loops!

With work out of the way for now it was time to reconnect with Blu and head South.  Thanks to Brian and Dallas for everything, really.  Rides, roof, food and care.  You guys are truly special people.
Day 1 - Canada to US somewhere near Portland via ferry to Port Angeles, WA. Took Black Ball ferry for $65 USD and met Cal on an mint condition 2003 BMW GS1150 who was going all the way to San Felipe, Baja California after some stops in the USA like me (different stops).  Thanks for the tips Cal.

Highway 101 (Port Angeles) to Olympia C5/6R7T7V8 had coast, green, woodland, hills/mountain. Easy in to the US inland temp at 26C and coast down to 20C as fall kicks in.  Second half of day after a pricey cider ($14CAD incl 20% tip) went all the way just South of Portland where I hoped the moto wouldn't get stolen.

Day 2-4 - Yuba City. Almost 11 years to the day I was riding a 2008 Vstrom South to Latin America and I reminded my friend Toni of that.  She said, "well you better stop here!"  4 hrs of Insterstate-5 stopping at Black Bear Diner to eat and receive Toni's messages added another unexpected 5 hrs at the end of the day.  Challenge accepted. Not so fun riding through the mountains with a bunch of big trucks at 130 kph in the dark, but at least it wasn't too cold.  10pm arrival!
The next morning after a great catch up with Toni as I was checking over the bike I noticed the chain had a super tight spot and it needed to be changed out. Long story short, "Toni, can I stay 2 more nights, please".  Thanks so much Toni for the hospitality and also to Brandon at Work and Play Motorsports for getting the chain on the bike as quick as they could.  And thank god I didn't panic and get Mike's Custom to do it for double the price ($650!)

Black Bear Diner, the gas station guy's recommendation.  Tasty. If only I could eat the pies!
Unfortunately riding in the dark there wasn't anything I could do for snapping good photos.  Hopefully these help depict the forest filled to desert like landscapes from Southern Oregon to North California.
A few days in Yuba City where Toni works as a teacher and plans her next global adventure. Good to see her mom and sisters again too.  More kids than were in the picture 11 years ago.

Staying in Potrero area on the hills of SF.  Great spot, great room, and great company. 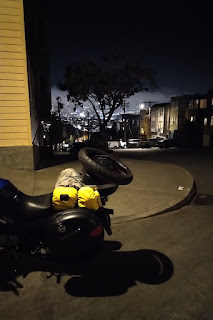 Day 7-9 Los Angeles. Another stop that I hadn't made since my trip to Argentina in 2011, seeing my friends Dorit and Gareth and their new baby who is now 9 years old, Kayden and loves sailing!  Exciting stuff.
Big ride; starting on the Hwy 1 to Monterey C5R8T4V7/8, coast, coast, coast.

Although I couldn't remember the exact route from 2011 I had definitely been to Cambria and further down the coast, but due to the cold 15 C temp with a bit of rain I decided to head inland on to Hwy 101. Oh and I still had 2.5 hours to go to LA plus the mess that is LA. Hwy 154 C6R7T3V7. Lake Cachuma.


A few great days hanging with Gareth, Dorit and Kayden.  Thanks so much for everything guys!
VR gaming for the first time.  Intense! Well, wait for it in the second half of the video as the first part I was just warming up.
Day 10 - San Diego. My excitement to get back into Mexico had me almost skipping past what turned out to be a great city.  Amazing views, tonnes of sailing, aircraft carrier! nice city centre and an excellent community called "Beaches".
Took PCH 1, C3R8T8V7 to Laguna Beach (memories) then on to I-5, C2/3R8T5V6 and all the way in to San Diego to stay at Loma Point near the massive Naval Base which made sense since this is basically the Mexican Border (15 min by taxi).