In Part 2 of the month I rode in to and down the Baja peninsula all the way to La Paz, stopping in San Felipe, San Ignacio and Loreto in states Baja California and Baja California Sur (BCS). And at the end of the month I began a month long stay in La Paz which had been on my list for a long time. Be sure to check out November 2022!

Day 11 - San Felipe (425km). Left San Diego late morning unsure of how far I would get on my balding and repaired back tire, but definitely in to Mexico somewhere after getting through the border. Hwy 94 to Tecate C5/6R7T6/7V6/7

Border at Tecate was quite quick and easy.  I think knowing spanish made it even better. Likely the Tax Free Zone of all of Baja makes this whole area pretty simple for foreigners to enter, but be careful to know where to get proper paperwork if you want to go to the rest of Mexico.
Hwy 3 to Ensenada C5R7T3V7, desert, vineyards, foothills, loose speed limits.
Highway 3 to San Felipe (first 100 km). C7/8R7T2/3V7 then Part 2 (100 km) to the coast and a first look at the Sea of Cortez. C3R6T1V8.
Recommendation: El Guero Tacos conveniently across the street from the impossible to find Hotel Arogon.

Day 12 - San Ignacio (550km). A long solitary day of about 600km and 150km between gas stations so I made sure not to miss any turns which was easy as its basically Highway 5 in to Highway 1 and keep going South.  Tire still going well.
The newly completed (paved) Hwy 5 was great.  175km from San Felipe to Hwy 1 junction C4R7T2V7, desert, cacti and the Sea of Cortez.

In to Baja California Sur and a time zone change I didn't catch for a couple of days as it was a straight South border.  Border to Alvardo Aramburo C1R6/7T2V5/6.  And then on to San Ignacio C2R6/7T2V5/6.  A bunch of sand detours on this section of road where I almost ate crap a couple times, didn't find much for restaurant options and encountered a power hungry border patrol minutes from San Ignacio when I was so hungry!

Tiny little village of San Ignacio that has been in existence since a mission was developed there in 1728. A nice little plaza with a few restaurants. I had a late lunch at the one corner and a pricey dinner at the other corner recommended by the host of Hotel Posada ($23 a night) who happens to be the brother of the restaurant owner.  I'm sure everyone is related here.  Tire holding up.
Day 13 - Loreto, BCS.(300km) Late start and varying shorter ride. San Ignacio to Santa Rosalia C2R7T5V6, pretty straight to the coast then a short shot to the quite little town of Mulege that also was a mission discovery in 1700.  C3R5/6T5V7.

Staying at San Martin Posada for $28 USD in the middle of Loreto with good parking and a comfy bed!

Last 70 km to La Paz was so exciting especially when I saw the Sea of Cortez again!
No Pee story: About 10 km outside of La Paz I decided to pee to avoid bladder pressure in town if there would be traffic or I got lost.  Needless to say some cops passed by and honked.  I luckily put things back before peeing which is apparently illegal on the highway side in Mexico...may be it is Canada too? In the end I got out of it in my own way which is part of why I have the photo below for proof I did nothing.  Sorry guys, no cash for you!


Found a two bedroom place 1 block off the Malecon and 15 min walk to the centre of town.  The apartment was not as tidy as I would have liked but it had great parking for the moto and a staller view from the roof top!
Oh...and the tire was still good!
A quick run through of the apartment I will be staying in November.

To end the month I had a few nights along the Malecon in the centre of La Paz to take in Halloween and the Day of the Dead. 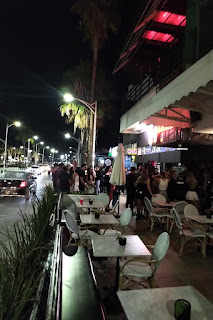 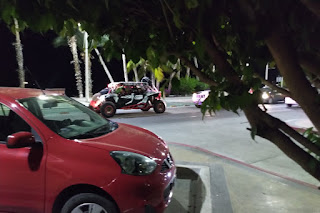 Some videos to capture the sights and sounds of the traffic jam on the Malecon.